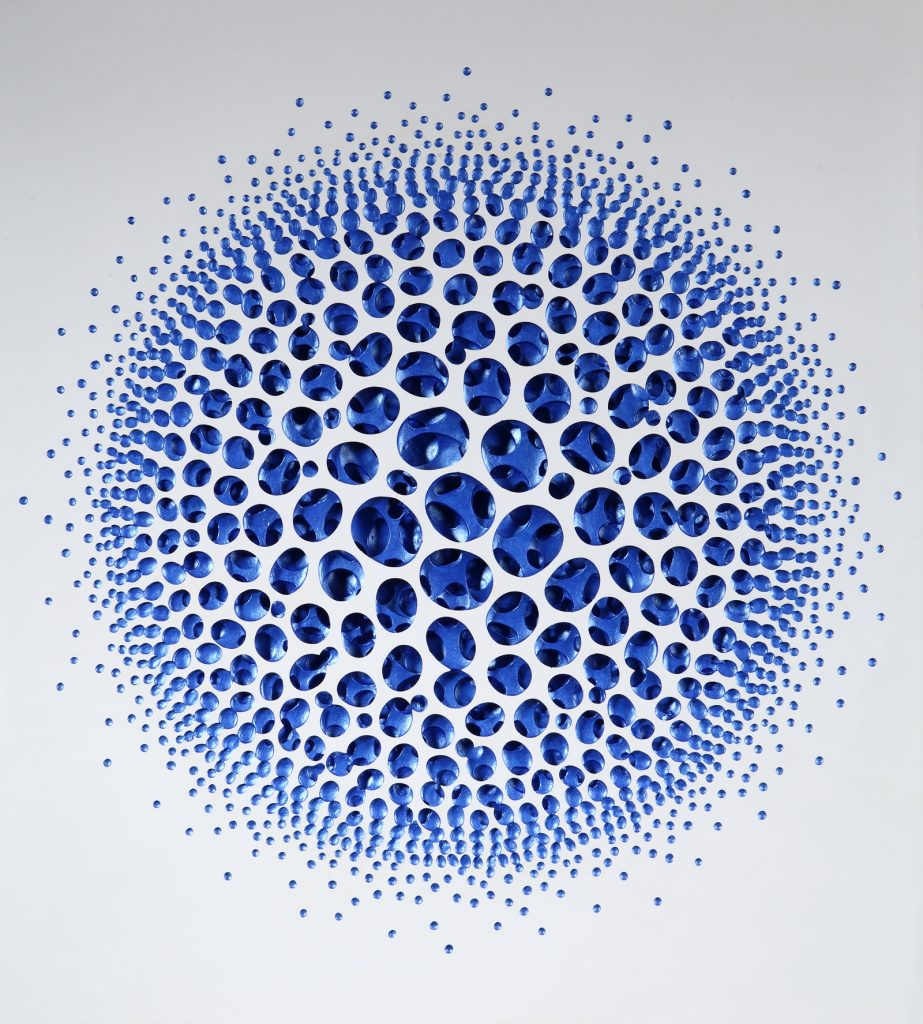 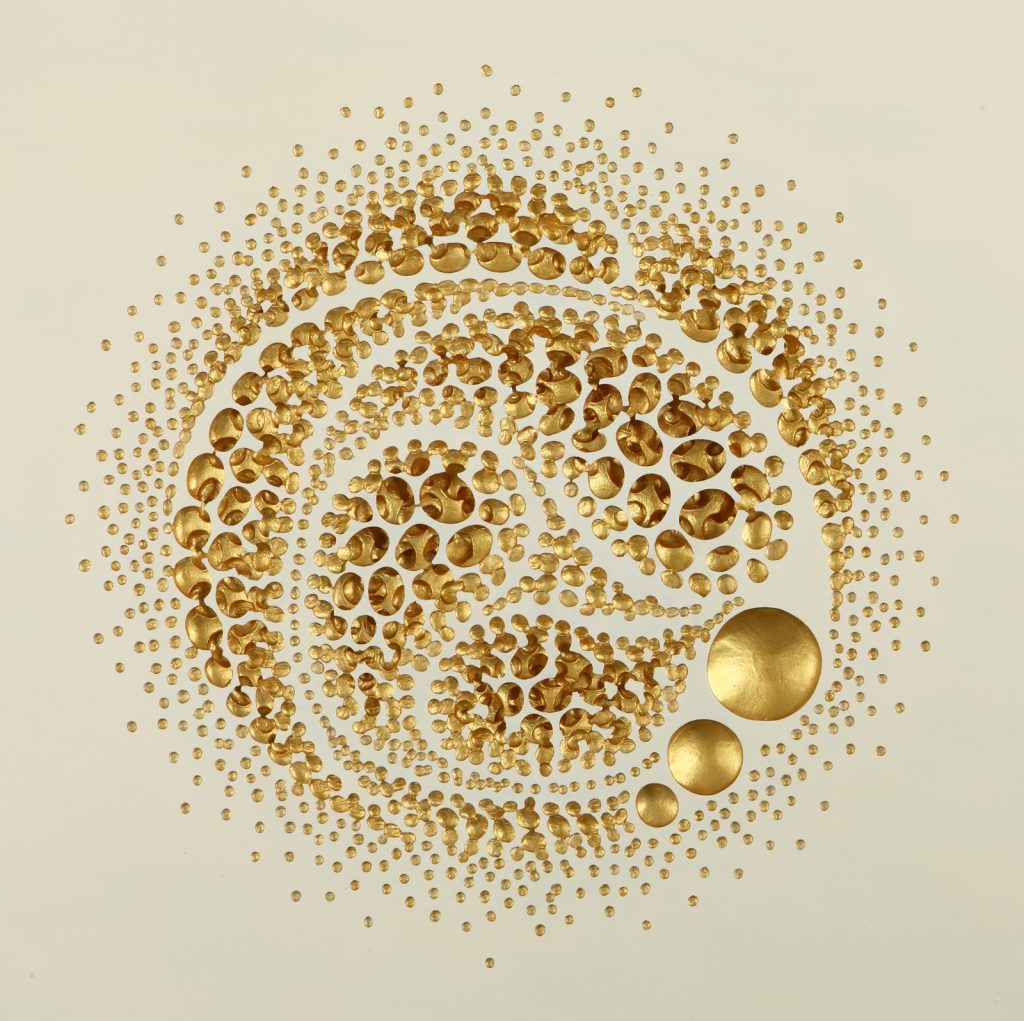 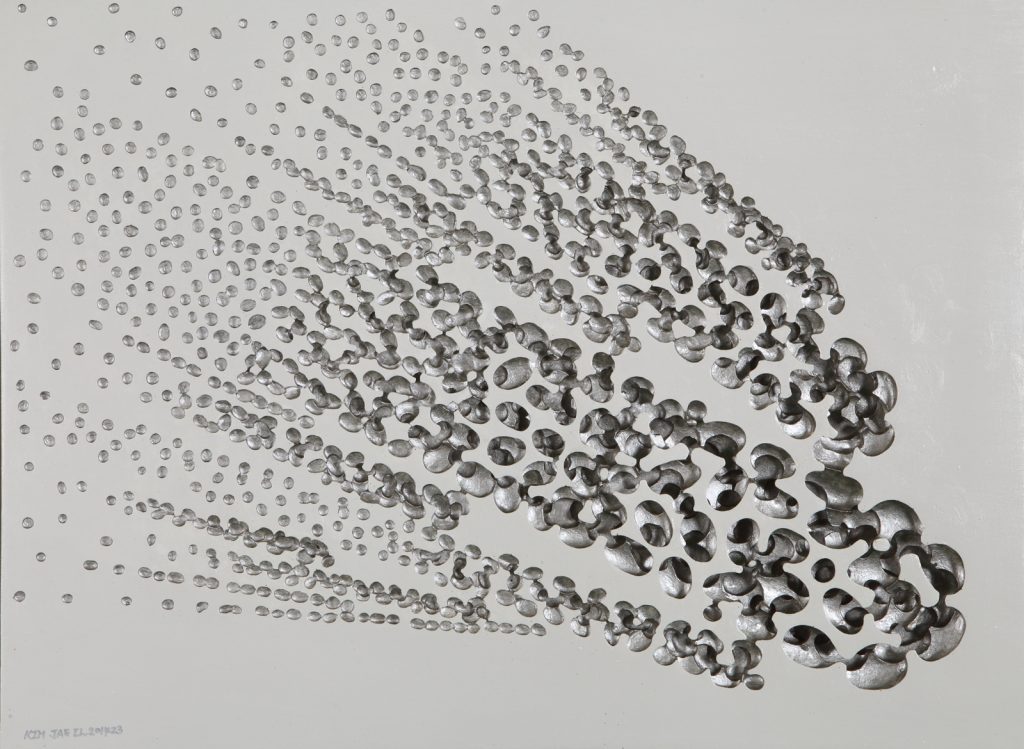 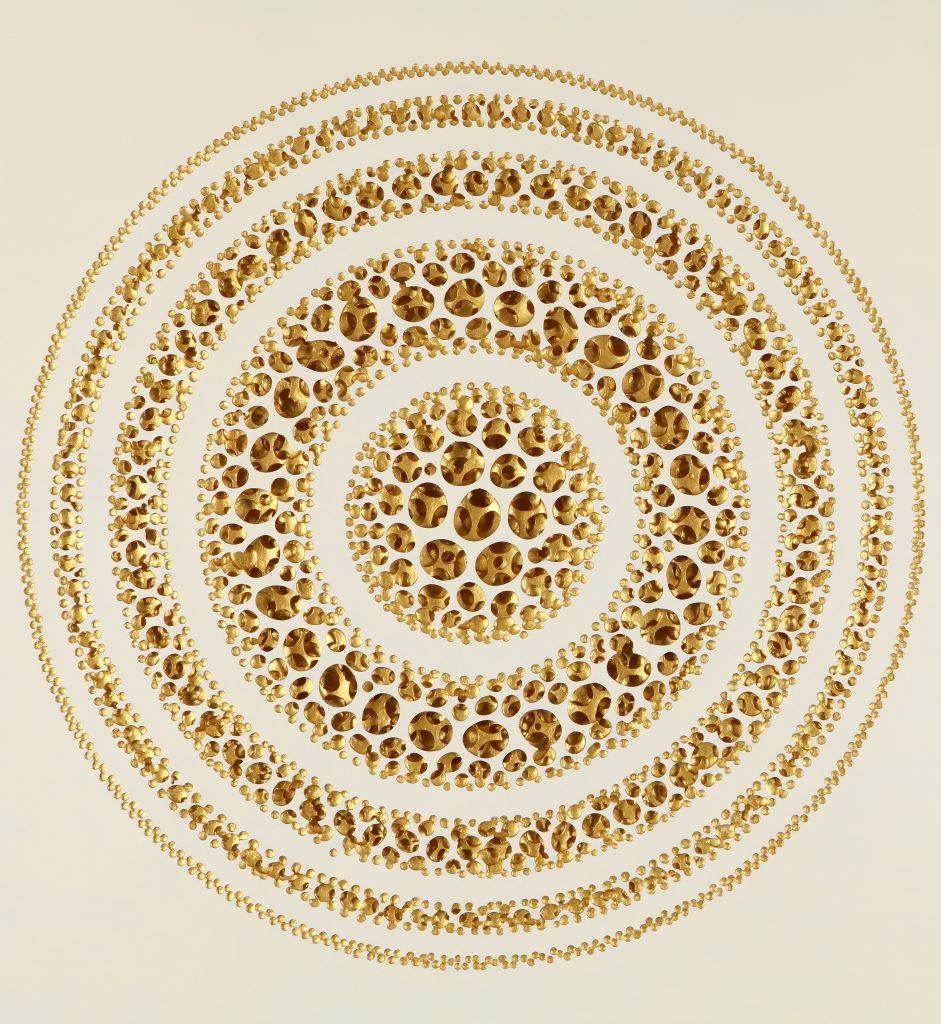 Kim Jaeil’s work of art, traces encompassing the reality and the world of infinity

A Korean poet, Kim Jiha once wrote that the universe is the body of the God. In that sense, it seems natural that an artist, Kim Jaeil has turned the direction of his artwork toward ‘the universe’ after working on sculptures of a human body that skin and bones. He asks questions of human existence by visualizing both the beauty of a human body that is the micro-cosmos and that of the universe that is the macro-cosmos.

Why do we exist? It is a question of what a human being really is. Also, it is the main topic of his previous artworks featuring with his interest about a human body that may be just a chunk of meat. For his previous works, he put a chunk of meat in an acrylic case and installed red lights. However, he started looking at the macroscopic aspects of human existence, which led him to explore the universe as the subject matter of his work of art. Now he visualizes his effort to catch stars twinkling up in the sky, symbolizing human desire that belongs to a human body that may be just a lump of meat. As a result, the direction of his artwork has changed into an art form, in which visual pleasure is considered more important than before.

He makes a cast out of clay and pour resin into the cast. After refining with glass fiber, he applies acrylic paints on it. As if creating a life form, the process of making his artwork is about visualizing the night sky on the earth where human desire sparkles like stars. As a human being, our lifespan cannot be compared to the eternity of the universe. It is like a moment that is frail and transient no matter how hard we try to catch the shimmer of the sky. After all, the history of human existence is just a trace.

His recent works are about human desire and the traces of it, which explain why those colorful artworks hanging on the wall look beautiful and bright. However, each of them apparently shows us his agony as an artist. By saying that he is deeply influenced by artists, such as Lucio Fontana who has a great sense of space composition, Lee Bontecou who is known for his own relieved sculpture, and Frank Stella whose artworks have features of sculpture, he alludes to how he struggles to find his own way of expressing himself between painting and sculpture while studying certain artworks that express the depth of space.

His previous works, which were about a lump of meat occupying the space, have changed into a relieved sculpture visualizing the universe hanging on the wall. It is his unique universe where two or three states encompassing this world and another world are layered, functioning as a window or a door to one state another. It is a world of karma that is the core view of the Oriental world.

A French writer, Marcel Proust once wrote in his book called ‘In search of lost time’, “Only through art can we emerge from ourselves and know what another person sees.” The world of Kim Jaeil’s artwork, in which he tries to expand the traces of this world into the universe, shows us the fate of a human being that he or she cannot be something else but a human being even if that person is able to expand into the infinity. Like a French philosopher, Alain Badiou explained, artistic events leave “traces”, they change things and “leave a cut in the world.” They have this transformative action, and between the traces they leave behind and the relation of the body to the world there is the subject. The body is either characterized as entirely material, says Badiou (the subject is reduced to the body, your identity is defined by your body), or the subject is seen as entirely transcending the body – dualism. Neither of these will do, so Badiou’s suggestion is that we need a third subjectivity, which does not reduce the subject. Art has to become the trace of its own action. It must be the place of its taking place. So the work of art is self-sufficient in its own secretive way, which is the equivalence of the art and desire.

Through his work of art, he shows us a lot of beautiful traces that represent our insatiable desires and trauma that cannot be healed. They make us realize how fragile we are as a human being in the eternity of the universe, to which we project our desire to reach the infinity. Dreaming of the world of eternity that shimmers with splendid colors while belonging to a human body that has skin and bones, he suggests another world that can be both the reality and the world of the infinity as if the two worlds are transferrable.

A French philosopher, Jacques Derrida said, “The trace is not a present but is rather the simulacrum of a presence that dislocates, displaces, and refers beyond itself. The trace has, properly speaking, no place, for effacement belongs to the very structure of the trace… In this way the metaphysical text is understood.” Those beautiful traces appeared in Kim Jaeil’s work of art show us that they multiply themselves with the power of beautiful colors as if being a living but dead creature craving for this world and the world of eternity at the same time, erasing and healing themselves. As long as he doesn’t stop asking himself questions of who he is and of what a human being really is, his work of art, the traces of the world could lead us to a further and deeper place, shining with the brightest and happiest light.